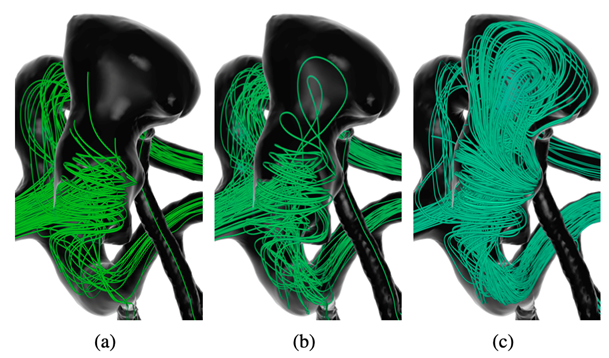 Rupture risk assessment is a key to devising patient-specific treatment plans for cerebral aneurysms. To understand and predict the development of aneurysms and other vascular diseases over time, both hemodynamic flow patterns and their effect on the vessel surface need to be analyzed. Flow structures close to the vessel wall often correlate directly with local changes in surface parameters, such as pressure or wall shear stress. To find meaningful structures in the entirety of the flow, we propose a combination of visualization, filtering, and interaction techniques for explorative analysis in combination with the usage of evolutionary algorithms to reduce the overhead of computing pathlines that do not contribute to the analysis, while simultaneously reducing the undersampling artifacts. We present clinical cases to demonstrate the benefits of both our filter-based and evolutionary approach and showcase its potential for patient-specific treatment plans.