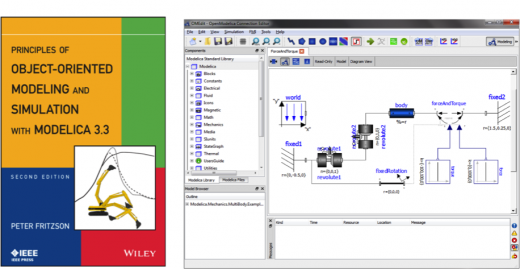 The modeling language Modelica is bringing about a revolution in the area of simulating complex cyber-physical systems for e.g. robotics, aircrafts, satellites or power plants.

Modelica is a general declarative equation-based object-oriented language for continuous and discrete-event modeling of cyber-physical systems for the purpose of efficient simulation. It is bringing about a revolution in this area, based on its ease of use, visual design of models with combination of lego-like predefined model building blocks, its ability to define model libraries with re-usable components and its support for modeling and simulation of complex applications involving parts from several application domains.

OpenModelica is a tool supporting the Modelica language. It is the most complete open-source Modelica-based modeling, simulation, and optimization environment. It is intended for industrial and academic usage. Its long-term development is supported by a non-profit organization – the Open Source Modelica Consortium (OSMC), see www.openmodelica.org.