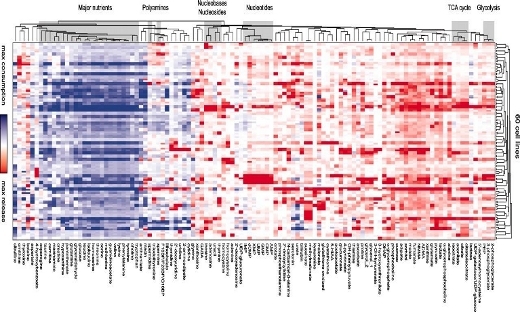 Glycine consumption and expression of the mitochondrial glycine biosynthetic pathway seem to be strongly correlated with rates of growth across cancer cells.

Metabolic reprogramming has been proposed as a hallmark of cancer, yet a systematic characterisation of the metabolic pathways active in transformed cells is currently lacking. Using mass spectrometry, we have measured the consumption and release (CORE) profiles of 219 metabolites from media across the NCI-60 cancer cell lines, and integrated this data with a preexisting atlas of gene expression. This analysis identified glycine consumption and expression of the mitochondrial glycine biosynthetic pathway as strongly correlated with rates of proliferation across cancer cells. Antagonising glycine uptake and its mitochondrial biosynthesis preferentially weakened rapidly proliferating cells. Also, more of this pathway was associated with greater mortality in breast cancer patients. Increased reliance on glycine may be a metabolic vulnerability for selectively targeting rapid cancer cell proliferation.