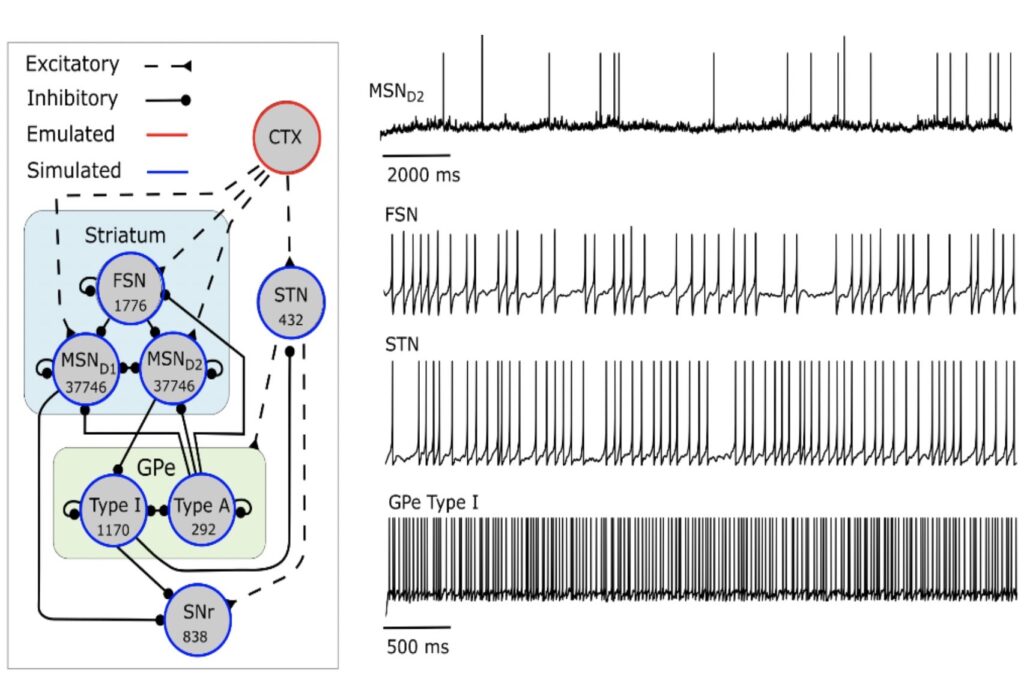 Basal ganglia (BG) are important for selection of behavior, and in Parkinson’s disease (PD), dopamine deficiency causes BG to malfunction. Also, the network dynamic behavior changes, and oscillations and spike synchronization develop. We built a BG network model consisting of 80 000 spiking neurons (Lindahl and Hellgren Kotaleski, 2017) and used it to better understand how network parameters contribute to function as well as network dynamics, and how functionality can be recovered in the disease state. Our findings improve the general understanding of how BG function and which network parameters are associated with impaired function versus when disease-associated parameter changes can be seen as compensatory. Our results may contribute to novel approaches for the treatment of PD. Ongoing studies are continuing to use this model framework to better understand mechanisms in behavioral ‘stop tasks’ as well as to pinpoint how different network frequency components can spread throughout the basal ganglia in health and disease (see also Belic et al, 2017)

Fig: We built a spiking network model of the basal ganglia to investigate the network dynamics and hypothesized function in the healthy (network illustrated to the left above) and dopamine-depleted state, the latter accomplished by modifying slightly the connections and/or membrane excitabilities. Modified from Lindahl and Hellgren Kotaleski, 2017.