e-Science of importance for Nobel prize 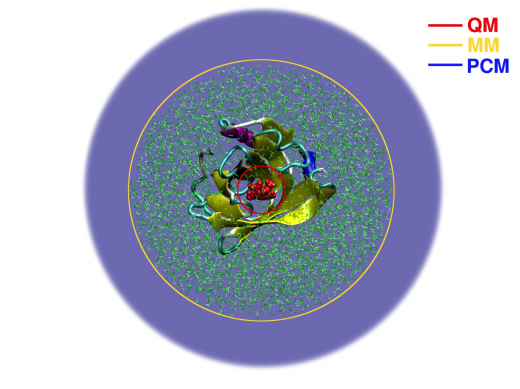 The recognition of e-Science is well exemplified by this year’s Nobel prize in chemistry which was awarded to the “Development of multiscale modelling for complex chemical systems”, with the motivation that: ”…By taking the chemical experiment to cyber space we can now get answers how chemical reactions work and understand the function of molecules”.The picture illustrates this type of multiscal modelling performed within SeRC; a 3-level multiscale model where the central part (QM, red ring) is treated by quantum mechanics in which each electron makes a difference, the middle part (MM, yellow ring) by classical mechanics in which each atom makes a difference and where the outer part (PCM, blue) is represented by an infinite continuum with no structure and only characterized by its dielectric constant. The picture is taken from a modelling study where a molecular spy (nile red) reveals  properties of a protein (betalacto globuline) immersed in a water environment. (Color modelling of protein optical probes, N.A. Murugan, J. Kongsted, Z. Rinkevicius and H. Ågren, Phys. Chem. Chem. Phys.  14, 1107 (2012))