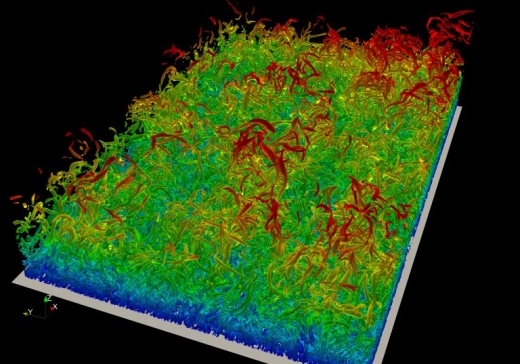 (Link to announcement in PDF)

KTH (www.kth.se) is the largest technical university in Sweden. Education and research cover a broad spectrum within natural sciences and engineering, as well as architecture, industrial engineering and management, urban planning, work science and environmental engineering. There are circa 12,000 full-time undergraduate students, 1,400 postgraduate students and 3,100 employees.

The School of Engineering Sciences carries out a wide range of research at the international front line, from fundamental disciplines such as physics and mathematics, to engineering mechanics with applications such as aeronautics and vehicle engineering. We also offer University degree programmes in Engineering Physics, Vehicle Engineering, Engineering and Education, and Open Entrance, as well as a number of International Masters Programmes.

The following three doctoral positions in Fluid Mechanics are open for applicants.

When the air flows over a wing it very quickly becomes swirling and chaotic, meaning that it is turbulent. This is associated with a large increase of drag of the airplane; which means that the fuel consumption increases as well as the associated emissions of green house gases. The drag and thus the emissions decrease if the turbulence can be avoided and the flow remains laminar. This has resulted in an increased interest for laminar aircraft design. Since laminar-turbulent transition in the flow close to a wing is usually caused by small unstable disturbances, the delay of transition aim at reducing the growth of these perturbations. An improvement of the capability to predict the laminar-turbulent transition and thereby a more accurate prediction of aircraft performance requires a better understanding of the growth of perturbations in realistic flows over an aircraft wing.

The aim of this project is to use advance numerical simulation tools to investigate and understand the transition process and initial parts of turbulent flow on a wing geometry. Due to the inherent nonlinear characteristics of the governing flow equations in such situations, a high-fidelity simulation of transition and turbulence, in particular close to solid walls, requires a large number of degrees of freedom (reaching up to several 10 billions). This necessitates the use of highly parallel algorithms (MPI/OpenMP) and large computer systems (e.g. the KTH Lindgren Cluster with 36000 cores, or even larger systems internationally). KTH Mechanics is very active in the field of large-scale simulations of turbulence.

This project is related to research activities in a bigger European research project (including several major European universities, aircraft manufacturers and aeronautic research institutes) with aim of improving the design methods for green aricraft of the future. In addition, a direct connection to the Swedish e-Science Research Centre (SeRC), will be maintained. Therefore, a broad collaboration between the various partners will be part of the working environment, including cooperation with other PhD students and Postdocs.

The applicant should have an MSc degree in a relevant area, e.g. Mechanics, Physics, Aerospace Engineering, or Numerical Analysis/Applied Mathematics, possibly with a background in fluid mechanics. A thorough knowledge and interest in large-scale numerical simualtions and parallel computers is a plus. The applicant should have good level in English both written and spoken.

The changeover from the ordered laminar flow to the chaotic turbulent fluid motion has puzzled researchers for a long time; to predict the so-called laminar-turbulent transitionis important both from a scientific point of view, but has direct consequences such as increased drag on airplane wings or changes the airflow inside jet engines. For certain cases, transition is fairly well understood, however, as soon as for example system rotation is added, the situation is far less clear. We therefore intend to study a model problem of transition on a flat plate, but under the influence of strong rotation. This particular flow case, therotating-disk flow (also known as the von Kármán flow) is the first boundary-layer flow for which a local absolute instability (as opposed to simply convective instability) was found by Rebecca Lingwood (1995, 1996) and the first boundary-layer flow where the instability mechanism has allowed an accurate prediction of the Reynolds number for the onset of transition to turbulence.

Transition studies are usually performed either experimentally in the lab, theoretically using analytical tools, or numerically by employing supercomputers. For the present project we have chosen to exploit all three aspects simultaneously: The ASTRID (A STudy of Rotation In Developing boundary-layer flows) research programme is carried out within the Linné FLOW Centre, KTH (Stockholm), as a collaboration between the experimental and computational groups. The experimental and theoretical parts are already underway and we now need to recruit a PhD student for the simulation part of the programme.

To perform simulations of such a flow case is challenging, and has never been attempted in the past. Special numerical schemes able to deal with the geometry, boundary conditions, but also the necessary (parallel) performance on supercomputers are necessary. This is coupled with the stringent requirements regarding accuracy and stability of the numerical method, as always important when simulating transitional flows. KTH Mechanics is very active in the field of large-scale simulations of fluid flow.

The applicant should have an MSc degree in a relevant area, e.g. Mechanics, Physics, Aerospace Engineering, or Numerical Analysis/Applied Mathematics, possibly with a background in fluid mechanics. An interest in both the physics of fluid flows and using large-scale numerical simualtions as a research tool is a plus. The applicant should have good level in English both written and spoken.

If you are interested in this project please contact Philipp Schlatter, who can give your more details of the planned simulations within the ASTRID programme, the application procedure and time plan. Professors Rebecca Lingwood and Henrik Alfredsson are leading other aspects of the ASTRID programme including a collaboration with Dr. Stephen Garrett, University of Leicester (UK).

It is common observation that the flow of air or liquid near a solid surface can become easily turbulent when the speeds involved are too large. Transition to turbulence is associated with dramatic losses in energetic efficiency and has profound consequences for design strategies in  aerodynamics, ship hydrodynamics, transport in pipelines, etc. However until recently the basic instability mechanisms leading to turbulence have been poorly understood and still represent one of the great unsolved puzzles of classical mechanics, nonlinear sciences and applied mathematics. A stimulating breakthrough within the turbulence community occurred in the last ten years when specialists started to borrow tools from deterministic chaos theory, aided by the ongoing progress of computer simulations. It is nowadays possible to extract numerically three-dimensional solutions of the Navier-Stokes equations. Such solutions allow to reconstruct the dynamical scenarios unfolding the complex dynamics of the flow and to help explaining the appearance of coherent structures observed at the onset of transition.

The aim of this project is to join a vibrant scientific community and push the understanding of transition to turbulence further. In particular, the ambition is to identify the physical mechanisms through which turbulence, once triggered, can spread spatially and contaminate a whole boundary layer. The project is based on high-fidelity simulations of transition and turbulence, using parallel algorithms (MPI/OpenMP) and large computer systems.

This project will be conducted at KTH in close collaboration with Dr. Yohann Duguet at LIMSI (Paris, France) and Prof. Bruno Eckhardt (University of Marburg, Germany). Research visits to these groups will be part of the project.

Start day: According to agreement.

The salary follows the directions for PhD students.

Applications should be send by e-mail to:. Carolina Eneqvist, carolina@mech.kth.se

The application (in pdf) shall contain